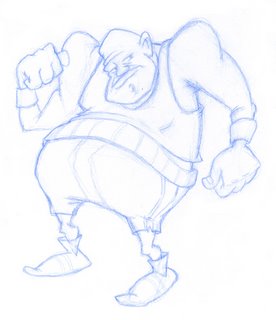 I was invited by Dave James to participate in a weekly character theme. "Wrestler" was the challenge in honor of the new movie 'Nacho Libre' (which was hilarious, by the way, for all you who've not seen it yet). I'm hoping to take this 'ere macho nacho man and paint him up in the near distant future. Thanks for letting me play too, Dave. This was a lot of fun! I'm tired of not posting, I feel so lazy! So I'm actually going to post twice in a week, amazing huh?

I've been drawing a lot of pigs lately because my children's book is full of 'em ... here are a few from my sketchbook.